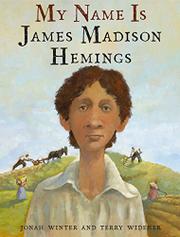 MY NAME IS JAMES MADISON HEMINGS

The life of James Madison Hemings, believed by most scholars to be one of several children Thomas Jefferson had with enslaved Sally Hemings, is imagined in this picture book of historical fiction.

James Madison Hemings looks back at his childhood as an enslaved person at Monticello. As he grows up he learns Jefferson is his father, but this connection is never to be acknowledged. Madison, as he is referred to in historical accounts, relates how the unspoken relationship affects his and his siblings’ lives: where they live, what they learn, and ultimately their freedom. “And yet, my name was written in my father’s ‘Farm Book’—the ledger where he recorded all his property.” In this first-person narrative, a child’s confused attempts to make sense of his situation ring true. Winter creates a tone of secrecy and distance in a place where no one is allowed to speak truth. Widener’s acrylic illustrations with their pastoral palette contribute to this with stillness, though they are not static. The many images of Madison as an observer of his surroundings reflect the fact he was the only one of Sally Hemings’ children to leave a written record of his life, a major source for Winter’s story. The detailed author’s note will be a welcome resource for adults, guiding them in answering young readers’ questions.

The strength of this telling is the way it encourages readers to empathize with Madison’s plight, making it a solid entry in that class of picture books tackling tough topics.