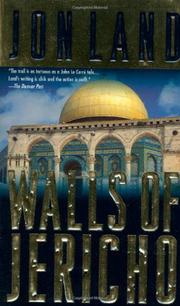 THE WALLS OF JERICHO

Land's 16th thriller (The Fires of Midnight, 1995, etc.) is an overdone cop-buddy serial-killer procedural, spiced, however, by romance and convincing below-the-surface probing into contemporary Arab-Israeli issues. Palestinians hurrying through the shabby streets of Jericho name their very own neighborhood serial-killer, Al-Diib, the Wolf. His numerous victims are mutilated so brutally that it's tough for the Palestinian National Police to determine even the sex of the corpses. Meanwhile, West Bankborn and American-raised Police Inspector Bayan ``Ben'' Kamal is burdened by considerable emotional baggage when he agrees to hunt the Wolf. Not only was his entire American family butchered by a serial killer when was a Detroit police detective, but his worldly-wise and weary take on what should be law and order in his lonely homeland makes more enemies for him than friends. Blessed with the requisite investigatory brilliance his job requires, however, Kamal has an almost masochistic capacity for pain: He endures a stoning at an appalling Palestinian refugee camp to win the confidence of a possible witness to a recent killing. Before his wounds heal, he's ordered to share his investigation with the spunky, beautiful, trigger- happy Israeli Shin Bet Agent Danielle Barnea. Barnea's and Kamal's bosses have only one interest in common: catching the Wolf before his killings disrupt the latest round of Arab-Israeli peace talks. Fortunately, Land drags his mutually antagonistic protagonists through a sandtrap of postCold Warstyle plot complications involving conflicting loyalties before having Barnea and Kamal fall passionately into each other's arms. By then the two have run down two Wolves and come up against some crazed Hamas terrorists who've cut a deal with Russian mobsters to move drugs into the new Palestinian state. Gory, formulaic, and a bit silly, but what would have been pointless entertainment is saved by sad, frequently ironic glimpses into the seemingly bottomless morass of Arab-Israeli politics.