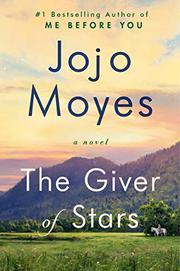 THE GIVER OF STARS

Women become horseback librarians in 1930s Kentucky and face challenges from the landscape, the weather, and the men around them.

Alice thought marrying attractive American Bennett Van Cleve would be her ticket out of her stifling life in England. But when she and Bennett settle in Baileyville, Kentucky, she realizes that her life consists of nothing more than staying in their giant house all day and getting yelled at by his unpleasant father, who owns a coal mine. She’s just about to resign herself to a life of boredom when an opportunity presents itself in the form of a traveling horseback library—an initiative from Eleanor Roosevelt meant to counteract the devastating effects of the Depression by focusing on literacy and learning. Much to the dismay of her husband and father-in-law, Alice signs up and soon learns the ropes from the library’s leader, Margery. Margery doesn’t care what anyone thinks of her, rejects marriage, and would rather be on horseback than in a kitchen. And even though all this makes Margery a town pariah, Alice quickly grows to like her. Along with several other women (including one black woman, Sophia, whose employment causes controversy in a town that doesn’t believe black and white people should be allowed to use the same library), Margery and Alice supply magazines, Bible stories, and copies of books like Little Women to the largely poor residents who live in remote areas. Alice spends long days in terrible weather on horseback, but she finally feels happy in her new life in Kentucky, even as her marriage to Bennett is failing. But her powerful father-in-law doesn’t care for Alice’s job or Margery’s lifestyle, and he’ll stop at nothing to shut their library down. Basing her novel on the true story of the Pack Horse Library Project established by the Works Progress Administration in the 1930s, Moyes (Still Me, 2018, etc.) brings an often forgotten slice of history to life. She writes about Kentucky with lush descriptions of the landscape and tender respect for the townspeople, most of whom are poor, uneducated, and grateful for the chance to learn. Although Alice and Margery both have their own romances, the true power of the story is in the bonds between the women of the library. They may have different backgrounds, but their commitment to helping the people of Baileyville brings them together.

A love letter to the power of books and friendship.