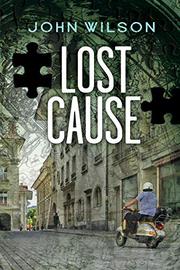 From the Seven (The Series) series

Posthumous messages and tantalizing clues send a teenager from Canada to Barcelona in search of a hidden chapter from his beloved grandfather’s past.

One of a septet of simultaneously published novels, all by different authors and featuring cousins who are each left a mission or task in their shared grandfather’s will, this takes Steve to Spain, where he discovers that his elder relative was a member of the International Brigades. He is guided by his grandfather’s old journal and also by Laia, an attractive young resident of the city who lectures him on the Spanish Civil War while taking him to several local memorial sites. Steve slowly gains insight into how it felt to believe passionately in a cause—even, in this case, a doomed one—and then to lose that innocent certainty in the blood and shock of war. The storyline is, though, at best only thin glue for a series of infodumps, and readers will get a stronger, more specific view of that conflict’s drama and course from William Loren Katz’s Lincoln Brigade: A Pictorial History (1989).

A tale driven by its informational purpose, with only a short story’s worth of plot.