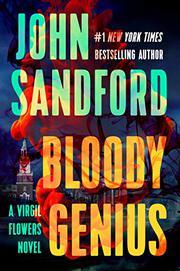 Virgil Flowers’ 12th appearance takes him into the homicidal heart of the University of Minnesota.

When a professor’s as brainy and wealthy as Barthelemy Quill, a nerve specialist who drives a BMW, you have to make some allowances for him. That’s presumably why his unnamed female companion agrees to let him sneak her into his personal carrel at midnight, hours after the university library has closed. But neither of them is prepared to find the dark carrel already occupied by another anonymous figure who, far from making allowances, reacts to Quill’s sputtering outrage by bashing him to death with his state-of-the-art laptop and running off with the murder weapon. Pressed by Quill’s equally rich sister to get faster results than Sgt. Margaret Trane of the Minneapolis PD has come up with, the governor gets the Bureau of Criminal Apprehension to send Virgil (Holy Ghost, 2018, etc.) to help out. Trane doesn’t want his help, but she’s won over by his determination to avoid taking the credit for any new leads and his success in finding a lead almost immediately: a hair on the yoga mat in Quill’s carrel that didn’t come from anybody’s head. Spurred on by the discovery, Trane comes up with a lead of her own: a hidden recording in which three men, one of them probably Quill, discuss a highly questionable medical procedure. Now, instead of too few leads, there are too many. Was Quill murdered by Ruth McDonald, whose quadriplegic husband killed himself after just such a procedure? By Quill’s own estranged third wife, in search of a bigger payoff than her prenup allowed? By professor Katherine Green, whose Cultural Science approach to medications he’d claimed had given fuel to rabid anti-vaxxers? By Boyd Nash, a sociopathic patent troll who’s made a specialty of taking credit for other people’s discoveries and accepting payoffs to go away quietly? Or by another suspect for still another reason Virgil and Trane can’t yet imagine?

Steadily absorbing revelations of all manner of malfeasance, beautifully handled, even if the final twist is less than the best.