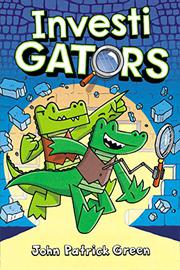 From the InvestiGators series, volume 1

As agents of SUIT (Special Undercover Investigation Team) with customized VESTs (Very Exciting Spy Technology) boasting the latest gadgetry, the bright green InvestiGators Mango and Brash receive their newest assignment. The reptilian duo must go undercover at the Batter Down bakery to find missing mustachioed Chef Gustavo and his secret recipes. Before long, the pair find themselves embroiled in a strange and busy plot with a scientist chicken, a rabid were-helicopter, an escape-artist dinosaur, and radioactive cracker dough. Despite the great number of disparate threads, Green manages to tie up most neatly, leaving just enough intrigue for subsequent adventures. Nearly every panel has a joke, including puns (“gator done!”), poop jokes, and pop-culture references (eagle-eyed older readers will certainly pick up on the 1980s song references), promising to make even the most stone-faced readers dissolve into giggles. Green’s art is as vibrant as an overturned box of crayons and as highly spirited as a Saturday-morning cartoon. Fast pacing and imaginative plotting (smattered with an explosion here, a dance number there) propel the action through a whimsical world in which a diverse cast of humans live alongside anthropomorphized reptiles and dinosaurs. With its rampant good-natured goofiness and its unrelenting fizz and pep, this feels like a sugar rush manifested as a graphic novel.