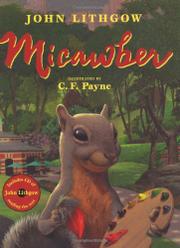 Now that Madonna’s a mama, it’s only a matter of time before she publishes her first children’s book. Imagine a touch-and-feel, some pop-ups, and a few lift-the-flaps. Whatever the case, the Material Girl might want to take a lesson from Lithgow, a celebrity who’s mastered the medium. Like the actor’s previous efforts (The Remarkable Farkle McBride, 2000; Marsupial Sue, 2001), his latest offering is poised for the bestseller list. The story is set in Central Park and stars the titular squirrel, an aspiring artist. Lithgow’s jaunty rhymes roll off the tongue as Micawber admires the Met’s collection: “Through the windows he’d gaze at Van Dyck and / van Gogh, / Appraise every Rembrandt and Titian. / He would scrutinize Rubens, peruse each Rousseau, / Inspect each Lautrec and Cassat and Miró. / He would find a new favorite each time he would go, / And nobody charged him admission.” He also meets his mentor. When the stranger packs up after a day spent reproducing Monet, Micawber stows away in her supply box. Payne’s realistic illustrations are bathed in a mysterious light, then flecked with color, as Micawber sneaks out at night to experiment with the woman’s paints. Through art, Micawber’s world is transformed. So is his tail, which he uses as a paintbrush. A final gatefold reveals Micawber’s creations hanging on the walls of his own “museum” with the requisite gala opening. The collaboration is perfectly charming from start to finish and—take note, Madonna—it comes with a CD of Lithgow reading the text. (Picture book. 4-8)