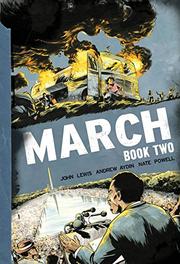 From the March series, volume 2

Heroism and steadiness of purpose continue to light up Lewis’ frank, harrowing account of the civil rights movement’s climactic days—here, from cafeteria sit-ins in Nashville to the March on Washington.

As in the opener, Powell’s dark, monochrome ink-and-wash scenes add further drama to already-dramatic events. Interspersed in Aydin’s script with flashes forward to President Barack Obama’s 2009 inauguration, Lewis’ first-person account begins with small-scale protests and goes on to cover his experiences as a Freedom Rider amid escalating violence in the South, his many arrests, and his involvement in the Student Nonviolent Coordinating Committee’s formation and later internal strife. With the expectation that readers will already have a general grasp of the struggle’s course, he doesn’t try for a comprehensive overview but offers personal memories and insights—recalling, for instance, Martin Luther King Jr.’s weak refusal to join the Freedom Riders and, with respect, dismissing Malcolm X: “I never felt he was a part of the movement.” This middle volume builds to the fiery manifesto the 23-year-old Lewis delivered just before Dr. King’s “I have a dream” speech and closes with the September 1963 bombing of the 16th Street Baptist Church. The contrast between the dignified marchers and the vicious, hate-filled actions and expressions of their tormentors will leave a deep impression on readers. Lewis’ commitment to nonviolent—but far from unimpassioned—protest will leave a deeper one. Backmatter includes the original draft of Lewis’ speech.