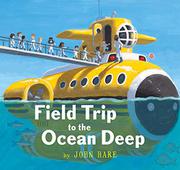 FIELD TRIP TO THE OCEAN DEEP

The ocean’s depths offer extra wonders to a child who is briefly left behind on a class trip.

In the wake of their Field Trip to the Moon (2019), a racially diverse group of students boards a submarine (yellow, but not that one) for a wordless journey to the ocean’s bottom. Donning pressure suits, the children follow their teacher past a swarm of bioluminescent squid, cluster around a black smoker, and pause at an old shipwreck before plodding back. One student, though, is too absorbed in taking pictures to catch the signal to depart and is soon alone amid ancient ruins—where a big, striped, friendly, finny creature who is more than willing to exchange selfies joins the child, but it hides away when the sub-bus swoops back into sight to pick up its stray. Though The Magic School Bus on the Ocean Floor (1994) carries a considerably richer informational load, in his easy-to-follow sequential panels Hare does accurately depict a spare assortment of benthic life and features, and he caps the outing with a labeled gallery of the errant student’s photos (including “Atlantis?” and “Pliosaur?”). The child is revealed at the end to be Black. Hare also adds cutaway views at the end of a diving suit and the sub. (This book was reviewed digitally with 10-by-19-inch double-page spreads viewed at 40% of actual size.)

A quick but adventuresome paddle into a mysterious realm.