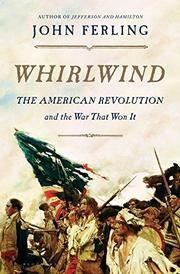 The American Revolution and the War that Won It

From servants to citizens: a nuanced study of the American Revolution focused on how the war changed the way Americans saw themselves.

Having written abundantly about the Revolutionary War, accomplished scholar Ferling (Emeritus, History/Univ. of West Georgia; Jefferson and Hamilton: The Rivalry that Forged a Nation, 2013, etc.) employs his extensive knowledge to relay a tremendously complicated and multilayered story of the gradual embracing of ideas of independence by the once-loyal colonists. Economic incentives drove the colonists to question the relationship with the mother country. They were offended by having to pay for Britain’s chronic warfare, furnish soldiers and then endure England’s “coldhearted indifference” to matters of the colonists’ “vital interests.” Attempts by Britain to enforce imperial trade laws—by the end of the Seven Years’ War in 1763, one-third of England’s trade was with the colonists—only led to more alarm that Britain was scheming to take away liberties. Little by little, the colonists began to react, and Ferling takes note of certain important early firebrands, e.g.—Virginia’s Patrick Henry, Boston’s Samuel Adams, John Dickinson and his “Letters from a Farmer in Pennsylvania.” Others, such as Benjamin Franklin, emissary to London, played both sides until they were sure which way the wind was blowing. Ferling effectively shows how the colonists’ sense of themselves changed from the very bottom up. From deep in the provincial hamlets, they were organizing, training their militias and accepting more egalitarian proclivities and self-governing practices, such as freedom from the Anglican yoke. Hostilities against Britain provoked a “rooted hatred” for the mother country and a “growing sense of identity as Americans,” although the outcome was in no way certain. In fact, for many years, it looked quite bleak. Ferling impressively demonstrates how the military reality eventually galvanized the fledgling country.