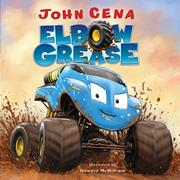 If it first you don’t succeed, try getting hit by lightning.

The smallest of his four brothers, Elbow Grease is an electric-powered monster truck with big dreams. Each one of his brothers is tougher, faster, smarter, or braver than he is, but at least he’s got enough “gumption” to spare. That comes in handy when he rushes off to join a Grand Prix in a fit of pique. And while in the end he doesn’t win, he does at least finish thanks to a conveniently placed lightning bolt. That inspires the true winner of the race (Elbow Grease’s hero, Big Wheels McGee) to declare that it’s gumption that’s the true mark of a winner. With his emphasis on trying new things, even if you fail, Cena, a professional wrestler and celebrity, earnestly offers a legitimately inspiring message even if his writing borders on the pedestrian. Fortunately McWilliam’s illustrations give a great deal of life, emotion, action, and mud splatters to the middling text. Humans are few and far between, but the trucks’ keeper, Mel the mechanic, is pictured as a brown-skinned woman with glasses.