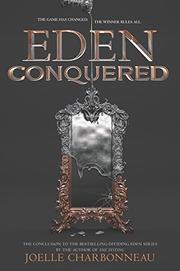 From the Dividing Eden series, volume 2

The vanquished princess Carys, thought to have been killed in a mortal struggle with her twin brother, Andreus, in the first volume in the series, continues her arduous journey.

With a handful of loyal followers, Carys returns to the Palace of the Winds to reclaim the Throne of Light. Weakened by the severe punishment she received in the Trials of Virtuous Succession and addicted to a powerful painkiller, the Tears of Midnight, administered by her nefarious mother, Carys nevertheless begins to be aware of the hitherto subconscious influence of the magical wind on her actions. Meanwhile back at the castle, Andreus, now king, is adept at repairing and maintaining the wind-powered, steampunk-style electrical lights which keep the Xhelozi monsters at bay. However, he remains vulnerable to the Machiavellian plotting of the Elders and his delusional but still powerful mother. Carys realizes that the enemy is becoming stronger as chaos in the castle causes the virtues to become unbalanced in the kingdom. She feels compelled to return to help her brother, if only she can follow Seeress Kiara’s advice to safely wield the wind by retaining control over her anger. The ending indicates that a sequel will surely follow this fast-moving, intricately plotted thriller with a powerful, charismatic heroine, skilled in armed combat and learning to control her impulses.

Sure to appeal to teens raised on the Hunger Games and Divergent series.