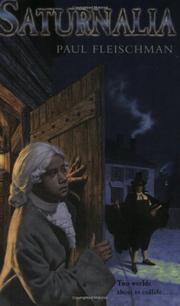 Fleischman, 1989 Newbery poetry winner, returns with historical fiction about masters and servants in 17th-century Boston. Kindly Mr. Currie, a printer, celebrates the winter solstice with an innocent day of role reversal: he and his wife serve their apprentices and their six children a feast; in the tradition of the ancient Saturnalia, wine flows and merriment prevails. But for many of their neighbors, the darker side of the season, resonant with the bitter legacy of King Philip's War six years earlier, is paramount. In carefully composed vignettes, Fleischman portrays the denizens of the night—a woodcarver who links his daughter's death to a haunting memory of massacring Indians; Stalking Rudd, a vicious eyeglass-maker, the terror of his apprentices; a mysterious lurker in the shadows; the night-watch. By contrast, a buffoon of a wigmaker and his conniving servant play their slapstick roles by day. In both worlds is William, Currie's Indian apprentice, who ranges abroad at night seeking the family from which he was brutally separated by the war; who is the obvious scapegoat when Rudd comes to a mysterious violent end; and who finally draws together the story's disparate strands in a choice he makes. Like Leon Garfield, Fleischman brings the past to life with pungent descriptions, incisive portraits, and robust humor. He observes his dark drama with a compassionate modern conscience and relates it with a storyteller's sense of audience and a poet's precision. A fine achievement.