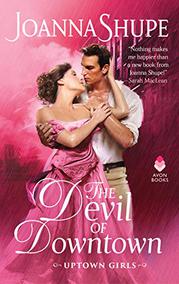 THE DEVIL OF DOWNTOWN

From the Uptown Girls series, volume 3

In Gilded Age New York, a young heiress falls in love with the city’s most notorious kingpin.

Justine Greene is the youngest of three sisters born into the highest echelon of society. Her family thinks she's shy, retiring, and committed to charity, but she hides the full extent of her work with impoverished women downtown. Justine refuses to let anyone make decisions for her and decides to help other women seize control of their lives. Where she used to serve meals or deliver blankets, now Justine is actively investigating and searching for deadbeat husbands who have abandoned their wives and children. One investigation brings her into the orbit of Jack Mulligan, the leader of New York’s largest criminal empire. When Jack offers to assist her in exchange for a future favor, Justine has no choice but to agree, and they are inexplicably drawn to each other. Justine is the only person who refuses to bend to Jack’s will, and she appreciates the generous, charming man who treats her like an adult instead of a child. In this final book of the Uptown Girls trilogy, Shupe (The Prince of Broadway, 2019, etc.) explores the porous boundary between what is legal versus what is ethical. Although Jack is a criminal, he does more to help people in the neighborhood than Tammany Hall politicians or the local police. Justine falls in love with Jack but fears she will compromise her principles by staying with a man who believes only in power; meanwhile, Jack doesn’t understand her naïve inability to see how the world really works. This dilemma is a richly layered, nuanced exploration of how lovers compromise on seemingly insurmountable differences.

A strong finish to an excellent series about strong-willed women determined to live life on their own terms.