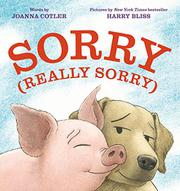 A chain reaction of spiteful words and actions ricochets across a farmyard until an act of kindness turns things around.

It all starts with Cow. Cross because she’s hoof deep in mud, the usually placid Holstein flicks mud onto Duck. Cranky because of Cow’s actions and unwillingness to apologize, Duck insults her friend Frog and proffers only an insincere apology. Frog criticizes Bird and refuses to feel remorse. Bird chases Goat from a space they normally share, then Goat butts Pig. Tenderhearted Pig, in turn, cries her eyes out. When Dog comes along to find out what’s the matter, Pig passes on the pique, but Dog refuses to bite. He patiently waits through Pig’s emotional storm, then reminds her of their long-standing friendship. Dog’s compassion prompts a sincere apology, which then boomerangs back through the other animals. The entertaining text moves briskly, filled with interactions that will be amusingly familiar to both readers and listeners. Although they possess the power of speech, the animals are portrayed relatively realistically in Bliss’ expressive ink-and-watercolor cartoons. The farm setting includes enough detail to ground the story without distraction from the action while the simply drawn faces, particularly the animals’ eyes, convey an impressive range of emotions. An exploration of the repercussions of a bad mood could have turned into a pedantic moral tale, but Cotler and Bliss’ light touch and humorous approach offer insight without judgment.