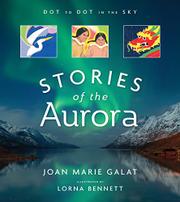 STORIES OF THE AURORA

From the Dot to Dot in the Sky series

Legends and folklore connected to the heavenly light show we call the aurora accompany facts and explanations from present-day science.

As in other titles in her Dot to Dot in the Sky series, Galat interweaves material from ancient cultures with modern scientific explanations in order to enhance readers’ sense of wonder about the night sky. Opening with general chapters describing the phenomenon, current scientific understandings, and folklore from both Northern and Southern hemispheres, she then goes on to give examples of cultures who interpret these mysterious lights as omens, fire, and dancers. Chapters are devoted to Inuit beliefs about sky spirits, stories from Norse and Greek mythologies, and tales from Canadian First Nations groups, the Wabanaki and the Mi’kmaq. Finally, she tells readers how and where to look for auroras, pointing to her website rather than NOAA’s Space Weather Prediction Center or the Canadian Space Agency’s live feed. Each chapter includes sidebars with even more detail about topics such as the Earth’s magnetic field, specific auroral qualities, and magnetic storms. The information is accurate and competently explained and the stories well-told. Illustrations include color photographs, characters from the stories, and diagrams. Sadly, other than the general attribution, no sources are given for the various tales.

A flawed but unique title, a useful supplement to other books about the night sky.