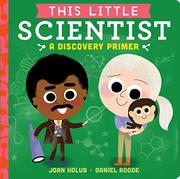 An introduction to 10 scientists for the youngest readers.

Each historical or modern figure is featured on their own double-page spread, which includes a close-up portrait and rhyming couplets on the verso, and the facing page features the scientist in action and a caption of a sentence or two offering more information about their work but often written at a level far beyond the board-book audience’s developmental capacity. The usual suspects are here, including Isaac Newton and Albert Einstein, but women and scientists of color can also be found, such as naturalist and painter Maria Sibylla Merian and particle physicist Sau Lan Wu. The verse is strained, forced, and often doesn’t scan (for Katherine Johnson: “This little scientist got the math right / to help NASA astronauts launch outer space flight”). In an evident attempt to be cute, the phrase “This little scientist…” introduces the figures and has the effect of demeaning the women, people of color, and people with disabilities depicted. The art, like others in the This Little series, features bobbleheaded caricatures of each figure in bold colors. The final two pages present 17 additional scientists in portraiture from throughout history and around the world and a brief caption, with a blank space left open for “You!”

A mismatch in every way.