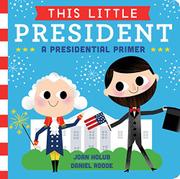 Ten U.S. presidents who were anything but “little” are featured in a rhyming board book. The choice of presidents is predictable: Washington, Adams, Jefferson, Lincoln, Grant, both Roosevelts, Kennedy, Reagan, and Obama. On verso, a four-line stanza is accompanied by a uniformly vapid-looking presidential “portrait,” and on recto, readers find a bit of presidential trivia and a slightly more detailed illustration. Selecting presidential achievements understandable to toddlers, an almost impossible task, results in oversimplification. John Adams, best known for diplomacy and the Alien and Sedition acts, is reduced to being the first vice president and the first president to live in the White House. Some information presented as fact is actually debated by presidential scholars on both the right and left. For example, speaking of Ronald Reagan, Holub asserts, “He brought the world together both near and far.” The spread about Kennedy (“He sent our first astronaut into outer space”) features a picture of Kennedy golfing with an astronaut as his caddy—a reference that only an adult will understand.

Rhymes and sturdy pages do not necessarily make a book right for toddlers; don’t expect this little book to please the little people for whom it was ostensibly designed.