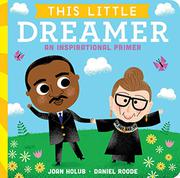 A board-book introduction to 10 workers for social justice.

The first double-page spread shows the five men and five women to be featured. Subsequent spreads include a close-up portrait and four-line verse opposite an illustration meant to demonstrate each inspirational figure’s work. A two- or three-line caption reduces the complex work of people like Dr. Martin Luther King Jr. and Supreme Court Justice Ruth Bader Ginsburg to vague platitudes. “Mahatma Gandhi led the people of India to freedom from being ruled by Great Britain” is woefully inadequate. Even so, the concept is still far beyond the board-book audience’s understanding. How to communicate to toddlers the work of Henry Bergh, ASPCA founder, or Dr. Jim Yong Kim, 12th chair of the World Bank? (Answer: He “works to help poor countries succeed.”) Dolores Huerta was chosen to represent the United Farm Workers, but including Cesar Chavez in her caption diminishes her role. Brief bios and portraits of 17 additional activists and a blank space labeled “You!” under the headline “Kindness, sharing, speaking out, fair play— / what could you do to help others someday?” complete the book. The bobblehead art, similar to other books in the This Little series, sometimes borders on offensive caricature.

This Little is both too little and too early to do justice to these important lives.