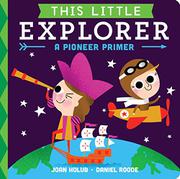 On the book’s first two pages, these and seven other explorers are pictured against an inaccurate world map. Holub’s serviceable rhyming couplets appear on the verso of the next 10 double-page spreads accompanied by a small portrait of the featured explorer. On the recto, there is a full-page image of the subject in action with a small one or two-sentence caption that shares further details. Roode’s brightly hued illustrations are lightheartedly goofy, turning these famous folk into bobble-head dolls with huge eyes. This does not serve these historic icons well; Matthew Henson looks anxious despite the accompanying verse declaring him “brave and bold,” and Neil Armstrong looks little older than the intended toddler audience. The final two pages include 11 additional explorers, with nods to diversity with the inclusion of Zheng He and six women, leaving a 12th spot with a question mark labeled “You!” for readers to imagine themselves in the mix. It’s hard to imagine many in the diapered audience who will have enough understanding of exploration or world history after this simplistic introduction to take advantage of that invitation, though.

Like Amelia Earhart’s plane, this bare-bones rundown of history is going to fly far out of range of what is developmentally appropriate for toddlers.