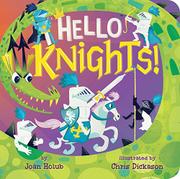 From the Hello…! series

In this rhyming board book, knights meet dragons and become friends after an almost-battle between the two is defused by silly undergarments.

Readers first meet the knights as they’re attending the queen and the king, marching, and guarding the castle. When dragons approach ready to fight, the knights halt the hostilities by raising the king’s underwear on a flagpole. Laughter ensues at the silliness, and the knights and dragons become friends when they start a party that readers find under a nifty, crenellated double foldout. Holub’s rhyming couplets are easy to read and have a rhythmic quality that feels almost like a classic epic poem. Dickason’s cartoony, detailed illustrations with comic-book influences will appeal to younger readers. The bold, brightly colored spreads illustrating “Hello dragons!” and “Goodbye dragons” stand out as the clearest and show admirable restraint. Details such as the king’s tattoos are a fun wink to adult readers. Preschoolers will giggle at the king’s undies flying high and will also feel relieved at the peaceful, happy resolution to the book’s climactic clash. While the story is a bit nonsensical—why do the knights decide to fly the underwear on a flagpole?—the overall silliness will appeal to younger readers who won’t mind the plot holes.

A goofy story and zippy illustrations make this a nice-enough book but not a must-have.