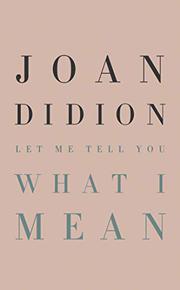 LET ME TELL YOU WHAT I MEAN

A dozen pieces of nonfiction from the acclaimed novelist, memoirist, and screenwriter.

In an appreciative introduction, New Yorker theater critic Hilton Als praises Didion as “a carver of words in the granite of the specific.” Stylistic precision (“Grammar is a piano I play by ear,” she writes) and the “energy and shimmer” of her prose are fully evident in this volume of previously uncollected pieces, written from 1968 to 2000. Although Didion portrays herself as a diffident, unconfident writer as a college student, she learned “a kind of ease with words” when working at Vogue, where she was assigned to write punchy, concise copy. The experience, she recalls, was “not unlike training with the Rockettes.” Several pieces were originally published in magazines, and two were introductions: one, to a volume of photography by Robert Mapplethorpe; another, to a memoir by director—and Didion’s friend—Tony Richardson. All reveal the author’s shrewd, acerbic critical eye. In “Getting Serenity,” she reports on a meeting of Gamblers Anonymous, where, she notes sardonically, one woman “adapted her mode of public address from analgesic commercials.” William Randolph Hearst’s “phantasmagoric barony,” San Simeon, “seemed to confirm the boundless promise of the place we lived,” but, she decided, was best admired from afar, like a fairy-tale castle, “floating fantastically.” Didion’s rejection from Stanford elicited an essay about college as consumption, and her skewering of consumption and artifice recur as themes—for example, in her observation of the ways women stage themselves for portrait photographs. Several particularly revealing essays focus on writing: “I write entirely to find out what I’m thinking,” she famously admitted, a statement often misattributed to others. Writing, for her, is “the act of saying I, of imposing oneself upon other people, of saying listen to me, see it my way, change your mind. It’s an aggressive, even a hostile act.” As these pieces show, it’s also an accomplished act of seduction.