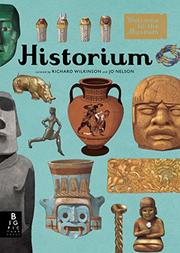 From the Welcome to the Museum series

An oversized album of archaeological treasures, from an early Stone Age hand ax to a 19th-century tiki pendant.

Inviting readers to take a sort of virtual museum tour, Nelson gathers over 140 representative artifacts into geographical “galleries.” She presents them with both broad opening overviews of their cultural contexts and individual descriptive notes on their features and anthropological significance. The large illustrations are not photos but digital images that are drawn in painstaking detail, colored in subdued or neutral hues, and reproduced on smooth but not polished paper. With further antique formality of design, the dimly but evenly lit objects are suspended against monochrome backgrounds, often several to a “plate,” and well-separated from the text. Though the focus is largely on defunct civilizations—Egypt and Mesopotamia to Olmec, Korean Silla, and the Vikings—the author acknowledges survivors such as the Pueblo and indigenous Australians. Readers on this side of the pond may feel slighted, as the gallery devoted to the Americas is the smallest and contains nothing from South America, but both the Torres Strait Islanders and several Polynesian cultures receive nods in the Oceania section. Moreover, rather than usual suspects like the Rosetta Stone or the so-called “Mask of Agamemnon,” the objects on display are often less familiar funerary, religious, or decorative objects. Many of the artifacts, particularly the gold ones, look drab, though, and none are either shown to scale or consistently accompanied by measurements. Furthermore, there are no maps or leads to further information.

An arbitrary assortment of relics not likely to furnish either the insight or the glimpses of wonder that elevate companion volume Animalium (2014).