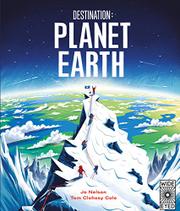 A swift tour of our planet’s surface and the forces that work changes on it.

In painted illustrations, Clohosy Cole sends five young explorers zigzagging from one generic locale to another in no obvious order. They learn the rudiments of latitude and longitude, trek through deserts and other biomes, witness both a tornado and an earthquake, parachute from a plane as a rocket roars past, look out over a river and a coastline, peer into a deep-sea crevasse where two tectonic plates are pulling apart, poke through a huge garbage dump, and finally do some gardening in a futuristic city. Nelson’s easily digestible definitions and explanatory notes, many of which are accompanied by smaller schematic images, are scattered over the scenes in inset blocks. With so much territory to cover it’s not surprising that the level of specific detail is, at best, ankle deep, but the author covers the geophysical basics accurately enough. Erupting volcanoes and cute rainforest monkeys notwithstanding, though, the art is conspicuously lacking in drama or wonder, and the higgledy-piggledy arrangement of the single-topic spreads gives the whole project a perfunctory air. Captions on a detachable fold-out map at the end contain a couple of errors, to boot. Of the five child guides, one is brown-skinned, and the other four are pale.

It’s a sweeping overview, but it’s too bland and disorganized to invite repeat flights.