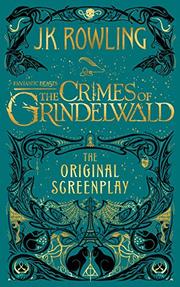 THE CRIMES OF GRINDELWALD

From the Fantastic Beasts series, volume 2

by J.K. Rowling ; illustrated by Minalima

The ruthless Grindelwald escapes to recruit more followers—one in particular—to his genocidal cause.

More a collectible spinoff than a fleshed-out story, the volume frames 120 quick-cut scenes of sparse dialogue and staging directions within swirling art nouveau–style borders, with plenty of similarly elegant spot art featuring occasional small images of magical creatures but no human figures. There are no stills from the 2018 film either, though director David Yates chimes in with a fluffy foreword, and the backmatter includes a vocabulary of staging abbreviations and partial cast and crew lists. The storyline, sketchy as it is in this form, picks up where the previous episode left off—readers will definitely need to have the established characters and events fresh in their minds to keep pace—and, after various side trips, gathers the ensemble (including token Muggle Jacob Kowalski) in Paris for a climactic dust-up beneath Père Lachaise cemetery. As usual in the Potterverse, agendas nearly always turn on family relations or class, so aside from a glancing reference to Grindelwald and Albus Dumbledore’s being “closer than brothers” in their youths, the main developments here center on the star-crossed Muggle/magical romance of Jacob and Queenie and the (supposed) ancestry of powerful but ominously impressionable Credence Barebone. Stay, as the saying goes, tuned.

Likely to be read once at most; still, a handsomely designed offshoot from the Fantastic Beasts franchise.