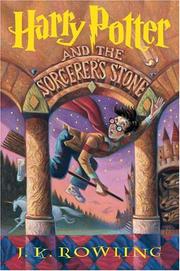 HARRY POTTER AND THE SORCERER'S STONE

From the Harry Potter series, volume 1

In a rousing first novel, already an award-winner in England, Harry is just a baby when his magical parents are done in by Voldemort, a wizard so dastardly other wizards are scared to mention his name.

So Harry is brought up by his mean Uncle Vernon and Aunt Petunia Dursley, and picked on by his horrid cousin Dudley. He knows nothing about his magical birthright until ten years later, when he learns he’s to attend Hogwarts School of Witchcraft and Wizardry. Hogwarts is a lot like English boarding school, except that instead of classes in math and grammar, the curriculum features courses in Transfiguration, Herbology, and Defense Against the Dark Arts. Harry becomes the star player of Quidditch, a sort of mid-air ball game. With the help of his new friends Ron and Hermione, Harry solves a mystery involving a sorcerer’s stone that ultimately takes him to the evil Voldemort. This hugely enjoyable fantasy is filled with imaginative details, from oddly flavored jelly beans to dragons’ eggs hatched on the hearth.

It’s slanted toward action-oriented readers, who will find that Briticisms meld with all the other wonders of magic school.