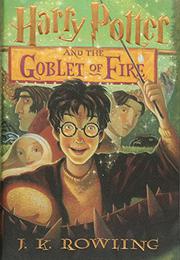 HARRY POTTER AND THE GOBLET OF FIRE

From the Harry Potter series, volume 4

As the bells and whistles of the greatest prepublication hoopla in children’s book history fade, what’s left in the clearing smoke is—unsurprisingly, considering Rowling’s track record—another grand tale of magic and mystery, of wheels within wheels oiled in equal measure by terror and comedy, featuring an engaging young hero-in-training who’s not above the occasional snit, and clicking along so smoothly that it seems shorter than it is.

Good thing, too, with this page count. That’s not to say that the pace doesn’t lag occasionally—particularly near the end when not one but two bad guys halt the action for extended accounts of their misdeeds and motives—or that the story lacks troubling aspects. As Harry wends his way through a fourth year of pranks, schemes, intrigue, danger and triumph at Hogwarts, the racial and class prejudice of many wizards moves to the forefront, with hooded wizards gathering to terrorize an isolated Muggle family in one scene while authorities do little more than wring their hands. There’s also the later introduction of Hogwarts’ house elves as a clan of happy slaves speaking nonstandard English. These issues may be resolved in sequels, but in the meantime, they are likely to leave many readers, particularly American ones, uncomfortable

Still, opening with a thrilling quidditch match, and closing with another wizardly competition that is also exciting, for very different reasons, this sits at the center of Rowling’s projected seven volume saga and makes a sturdy, heartstopping (doorstopping) fulcrum for it.