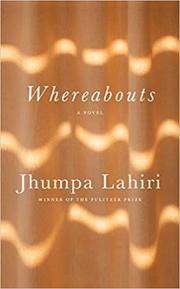 A year in the inner life of a solitary woman in an unnamed European city.

"Unfortunately my childhood harbors few happy memories. Instead I would tell her about the balcony of my apartment when the sun is shining and I'm having breakfast. And I would tell her how much I liked to sit outside, pick up a warm pen, and write down a sentence or two": Here the melancholy narrator of Lahiri's first book of fiction since The Lowland (2013) explains how she responded to a therapist's request to say something positive at every session—perhaps suggesting the genesis of the book in our hands. Its spare, reflective prose and profound interiority recall the work of Rachel Cusk and Sigrid Nunez as much as Lahiri's earlier fiction, which generally focused on the Indian immigrant experience in the U.S. Lahiri now lives in Italy, wrote this book in Italian, and translated it herself. In 46 brief chapters identified by "whereabouts"—"On the Sidewalk," "At the Ticket Counter," "By the Sea," "In My Head," etc.—the narrator gives her impressions of the people and places she encounters in her provincial European city, not noticeably Italian until the last chapter, when she watches some tourists on the train practice saying arrivederci. Troubled by unresolved feelings about her dead father and elderly mother, the narrator is not much closer to her friends and lovers than to the people she so carefully observes in her meanderings about town. One day, one of the otherwise invisible lovers she refers to butt dials her over and over; when he calls to invite her to dinner that night, she refuses. Though she claims solitude "has become [her] trade," she admits "it plagues [her]." As time progresses, the view seems to darken. "Disoriented, lost, at sea, at odds, astray, adrift, bewildered, confused, severed, turned around....These words are my abode, my only foothold." Fortunately, she has a plan that may change things for her.