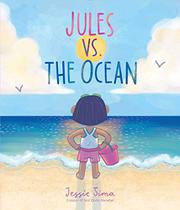 JULES VS. THE OCEAN

…but the Ocean has other plans! Sima’s story hinges on Jules’ adoration of her big sister (unnamed and with slightly darker brown skin than Jules’ and their mom’s). When Mom brings them to the beach, Jules immediately starts building while her sister goes off with a boogie board. Jules toils away, and as the tide rolls in, the Ocean demolishes her creation. While Jules takes the Ocean’s destruction personally, her sister says, “this happens to everyone” before heading back out to the waves. Jules is discouraged as she sees other kids’ impressive, still-standing sand castles, but she persists only to be thwarted again by the Ocean. Her lowest point comes when the tides sweep away her bucket. Big sister comes to the rescue—not to save it but to help build another castle, using only their hands. It’s “definitely the BIGGEST…FANCIEST…MOST EXCELLENT” castle, but then, “Uh-oh.” A massive, spread-spanning CRASH! both obliterates the castle and leaves Jules and her sister exhilarated, and they race back to tell their mom what’s happened. In a twist that feels lifted from a Bob Graham story, “Mom assures them that happens to everyone.” Sima’s big-nosed cartoons are also reminiscent of Graham’s, in both the character-developing details (Jules’ ears stick out through her bobbed haircut endearingly) and their obvious affection for one another.