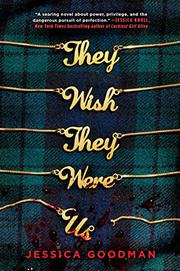 THEY WISH THEY WERE US

Things haven’t been the same for high school senior Jill Newman since her best friend was murdered.

Three years ago, Graham Calloway confessed to killing his girlfriend, Shaila Arnold. Now he’s in a juvenile facility, and Jill is starting senior year at Long Island’s Gold Coast Prep without her dearest friend. Luckily, Jill has Nikki Wu, whom she’s grown close to since Shaila’s death; her sweet boyfriend, Henry; and, of course, the Players, an exclusive club that all but guarantees an easy ride to a successful future. Jill, an aspiring astronomer who attends Gold Coast on a scholarship, must help choose the next round of freshman Player recruits while also securing desperately needed scholarship money for college. When Graham’s sister, Rachel, texts Jill with claims of Graham’s innocence, Jill reluctantly agrees to help. What if he actually is innocent? As Jill digs for the truth, she must come to terms with her own complicity in the Players’ culture of misogyny and casual cruelty and realizes that Shaila might have been keeping explosive secrets. Goodman deftly explores the complex nature of friendship, privilege, grief, and the often crushing expectations placed on teens, all of which dovetails neatly with a twisty murder mystery. Most characters seem to be white except for Nikki, who emigrated with her family from Hong Kong; Jill is Jewish. There is queer representation in the supporting cast.

A sophisticated and suspenseful debut.