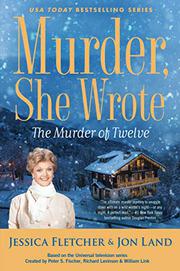 THE MURDER OF TWELVE

Jessica Fletcher takes on a blizzard and a persistent murderer in a modern Agatha Christie pastiche.

It’s a decidedly mixed blessing that Jessica’s staying in Cabot Cove’s Hill House hotel while her own home is being renovated. Before an impending blizzard arrives, she’s on hand to accompany Sheriff Mort Metzger to a car where a man’s been found dead. It looks like an accident or suicide, but Jessica quickly discerns that he was murdered. With five feet of snow predicted, there’s little time to figure out who killed private investigator Loomis Winslow or what happened to the people missing from a different abandoned car. Back at the hotel, Connie Mulroy asks Jessica for an autograph and invites her to join her group for dinner. Connie is the mother of the groom and part of the wedding party that is staying at the hotel, which, due to the storm, may be forced to provide the venue for the ceremony if the bride and groom ever arrive. When Connie barely survives a poisoning attempt at dinner, Jessica plunges into the affairs of her new acquaintance. All the suspects are friends or relatives, and there’s been no love lost between the families ever since Connie’s husband swindled the bride’s father out of a bundle before jumping off the Brooklyn Bridge. As the other guests are picked off one by one, Jessica’s usual lifelines remain too far away to help, and she must rely on her wits to survive.

A tense, complex, action-filled mystery with shoals of red herrings and plenty of surprises.