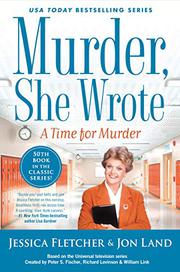 A Time for Murder

Jessica Fletcher (Murder She Wrote: Murder in Red, 2019, etc.) must review the very first murder case she solved in order to find a brand-new killer.

When high school senior Kristi Powell, interviewing Jessica for a series on former teachers at Cabot Cove High, asks about her first real-life murder case, Jessica is reluctant to answer. But Kristi keeps pushing about the case, which took place 25 years ago in the halcyon days when Jessica and her husband, Frank, were raising their nephew and she was a substitute teacher in the nearby town of Appleton. A visit to the high school reveals that Jessica’s interviewer was an imposter who’s shortly found shot dead. In death, the phony Kristi Powell is finally identified as Ginny Genaway, a 33-year-old whose divorced father, Walter Reavis, was the high school principal whose murder first turned Jessica from teacher to sleuthing mystery writer. Ginny had an older sister, Lisa Joy, who’s long gone from the area and a brother killed while serving in the Middle East. An invitation to a retirement party for former fellow teacher Wilma Tisdale brings back a flood of memories from the days when Jessica helped the local law solve Walter’s murder. Now she’s eager to help Sheriff Mort Metzger with this one. So is Ginny’s husband, an incarcerated mob boss who sends a few associates to Cabot Cove just in case Jessica needs help. Slowly Jessica reveals the details of how the earlier case was solved and who was involved, throwing light on the current case, which features some of the same people. Ginny’s mother is found living in an area lighthouse, and Lisa Joy may or may not be dead in what may or may not be an accident. Wondering who’s targeting the Reavis family gives Jessica ample opportunity to reflect on her storied past.

A nostalgic portrait of the past illuminates a tricky case that’s one of the heroine’s best.