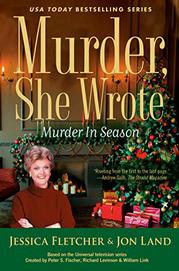 The arrival of Christmas cues a murderer to play Scrooge.

Jessica Fletcher is finally moving back to her home that was ravaged by fire in Murder, She Wrote: The Murder of Twelve (2020). The only last-minute glitch is the new septic system that’s required. Unfortunately, the folks digging up her yard discover an old chest and two corpses. Without missing a beat, Jessica sets to work with her old partners in crime-solving, Sheriff Mort Metzger and Dr. Seth Hazlitt. One body is fairly recent; the other may be hundreds of years old. Both interest muckraking reporter Tad Hollenbeck, of the TV show Stalker, who’s doing a long-overdue piece on Cabot Cove as the murder capital of the world. The chest holds papers relating to the town’s five founding families, who made their fortunes in shipping and milling and still have descendants in the area. In addition to papers of interest to historians, it contains shocking information about the founders’ slave trading. For Jessica, who wonders if the sins of the past are still causing trouble, the most important document is the diary of John Henry Cabot, which she expects she'll have to put aside once she's called on to solve the murder of Tad Hollenbeck. The story of stolen diamonds in the diary, however, leads her to a motive for murder as the founders’ surviving relatives become suspects (the lucky ones) and corpses (those less lucky) in a complex investigation that threatens to spoil Christmas.

Cozy as a warm blanket as Jessica Fletcher hunts down yet another killer with her customary panache.