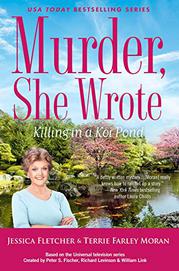 MURDER, SHE WROTE: KILLING IN A KOI POND

A visit to an old college pal takes a dark (but not too dark) turn when a renowned mystery author discovers a death that screams murder, at least to her.

Delighted to be reunited with her old friend from Harrison College, Jessica Fletcher’s curious about Willis, the man Dolores Nickens has just wed. After two failed marriages, Dolores may finally have found the soul mate she’ll settle down with forever, and Jessica’s cautiously pleased to make his acquaintance on a trip to Manning Hall, his impressive South Carolina home. But Willis raises Jessica’s hackles: Though he’s obviously warm to Dolores, he’s the kind of guy who can turn his charm on and off. When he tries to fire members of his staff before a dinner party, Dolores must talk sense into him by pointing out that fired people can’t serve guests. The one person Willis can never be upset with is his 9-year-old granddaughter, Abby, the apple of his eye, and of his bride’s too, though she’s grandmother by marriage rather than blood. His doting on Abby seems inversely proportional to his loathing of his son-in-law, Clancy, whose irresponsible lifestyle irks Willis to no end. But none of these domestic tensions mar Jessica’s visit until Willis is found dead near the estate’s koi pond. Jessica is instantly convinced that Willis has been murdered and equally convinced that her job as famed mystery author J.B. Fletcher will give her the insight to solve the case—if only she can convince the reluctant local sheriff of the same.

A quintessential cozy that breaks no new ground and doesn’t need to.