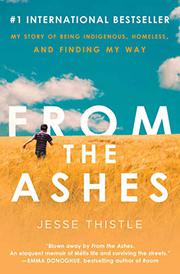 My Story of Being Indigenous, Homeless, and Finding My Way

A Métis-Cree writer and professor examines how poverty, addiction, and poor choices led to a life of homelessness and crime.

The son of a Métis woman and an Algonquin-Scot man, Thistle spent much of his childhood in Saskatchewan dealing with his drunk, abusive father, who taught his children how to beg and steal. Eventually, the police put the children into foster care until Thistle's paternal grandparents became their guardians. Under their stern but loving care, the author's life normalized somewhat. Meanwhile, however, schoolmates taunted Thistle and his siblings for being “ugly Indians” abandoned by their parents. Self-identifying as Italian, the author began drinking and taking drugs during high school. Though his burgeoning habit temporarily abated when he fell in love with a young woman named Karen, an argument with his grandfather angered him enough to spend all of his hard-earned college money on drugs and alcohol. When his grandfather finally told him to leave, Thistle's life spiraled out of control. He became homeless and relied on "food banks, churches and shelter beds,” drifted from city to city, and got addicted to crack. One night, while high, he fell 35 feet from an open window and shattered his leg, which eventually developed gangrene. He was in and out of jail and rehab, and his health continued to deteriorate drastically. Estranged from family and gravely ill, he returned again to rehab, "shaking and vomiting and praying for mercy.” Then he started the long road back to not only personal recovery, but also reconciliation with friends, family, and his Native past. As Thistle narrates his personally harrowing, ultimately uplifting story of survival, he also addresses the life-altering damage that colonialism has wrought on Indigenous people everywhere—especially “how, when one’s Indigeneity is stripped away, people can make poor choices informed by pain, loneliness, and heartbreak, choices that see them eventually cast upon the streets, in jail, or wandering with no place to be.”

A courageously heartfelt journey from profound self-destruction to redemption.