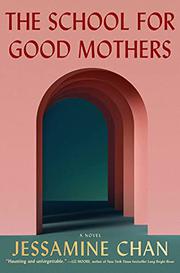 THE SCHOOL FOR GOOD MOTHERS

Current ideas about parenting are held up to scrutiny in a dark satire that's also a dramatic women-in-prison story.

"There are seventeen women tonight, including Frida. In one lit corner, they sit on cold metal folding chairs, arranged in a circle....They could be stars of a slasher film or the world's saddest hip-hop video." But in fact, they are mothers who have been separated from their children and incarcerated for one year at a former college campus outside Philadelphia. Recalling The Handmaids' Tale, Orange Is the New Black, and Clockwork Orange, Chan's debut features Frida, a 39-year-old Chinese American mom with a part-time job in academia and an 18-month-old named Harriet. Left for a younger woman by her husband, Gust, soon after their daughter was born, Frida is struggling with exhaustion and loneliness when she has her "very bad day"—she leaves Harriet alone in the house while she goes out to get coffee and pick up papers at work. Harriet is taken into custody, then sent to live with Gust and his girlfriend while Frida is surveilled in her home and on supervised visits to determine her fitness to parent. When she fails, she is remanded to reform school with other mothers who have looked away at the wrong time, who have given in to anger or selfishness, who must now repent and relearn. "I am a narcissist. I am a danger to my child," they are trained to recite, along with "I am a bad mother, but I am learning to be good." They are paired with lifelike robot dolls on whom they practice "Fundamentals of Care and Nurture" and study "Dangers Inside and Outside the Home." They are taught to speak "motherese" and to disregard their own needs and desires; they are tested, monitored, scanned, and evaluated. Friendships and romances bloom; desperation spreads; trouble brews. If this doesn't become a miniseries, nothing will.

An enthralling dystopian drama that makes complex points about parenting with depth and feeling.