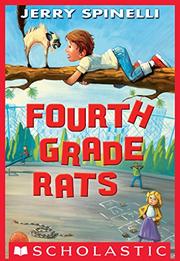 The latest Newbery winner spins a funny, light story about a couple of boys who take to heart a familiar chant: "First grade babies!/Second grade cats!/Third Grade angels!/Fourth grade rats!" Narrator Suds (so called because a warm bath is his most effective solace) is having a tough time complying with best- friend Joey's demand that he give up baby stuff like peanut-butter sandwiches and his treasured elephant-covered lunch box; macho behavior—such as being mean to little kids and creating chaos in his room—is even harder, while saying "No" to his mom proves almost impossible. Still, Joey's new behavior—especially his stoicism after a bee-sting—have such a dramatic effect on friend Judy's affections that Suds makes the effort, to the dismay of parents and teacher. Judy's regard turns out to be as fickle as it is self-serving; she literally leaves Suds up a tree after he rescues her cat. After Mom comes to the rescue, she and Joey's mother call a halt to the premature adolescent behavior—to everyone's relief. The humor here is broad but genuinely comical, while the kids' real concerns are presented with sympathy; the parents are laudably sensible, assertive, and good at keeping their cool. A fine addition to the Cleary/Hurwitz league. (Fiction. 7-10)