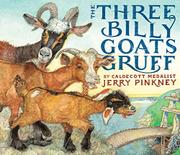 Three hungry goats, eyeing the lush grasses on the opposite riverside, “trip, trap” onto the bridge, each tussling with the troll barring passage. Snaggle-toothed, green-skinned, with a tail like a lion’s, the hungry troll allows the first two across, since each promises even bigger eats to come. Pinkney’s panoramic watercolor-and-pencil compositions visually differentiate the goats’ sizes. The littlest, with stubby horns, squeezes through the bridge’s gate. The bigger billy, with longer horns, leaps it. The largest, with full, curving horns, bursts through the gate with a “CRACK!” and “CRASH!” (A gatefold page amplifies the drama.) The threatened goat charges, butting the troll off the bridge. A giant, toothy fish yells, “WHO’S THAT SPLISH-SPLASHING IN MY RIVER?” Pinkney deals a lucky break, wryly speculating that “the troll was probably a bit too sour and green to make a tasty meal” for the retreating fish. Meanwhile, a whole “herd of billy goats” trip-traps over to enjoy that lovely green hill. Observant readers will detect, on the last spread and endpapers, that the goats and troll (who’s building a new stone hut) have swapped riverbanks.