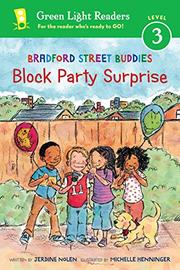 From the Bradford Street Buddies series

Another friend-filled neighborhood event is in store for folks on Bradford Street in this new early-reader series.

It’s the annual fall block party, and twins Jada and Jamal Perkins are excited. Their dad has some sort of surprise planned. When they look out the window, they are thrilled to see their parents outside with four large robot dinosaurs! After learning how to work the controls, everyone is ready for the trip to the park, where the dinosaurs will undoubtedly be the hit of the party. But in the fourth and final chapter, the crew has a big problem: the truck carrying the dinosaurs has broken down, and there is no way to get them to the party. The kids put their heads together and come up with a clever idea to create a dinosaur parade. New readers might wonder why Mr. Perkins supplies such an unusual addition to a block party, but they will marvel at the cooperation and creativity of the youngsters and parents on Bradford Street. Full-color, detailed watercolor illustrations show a welcome cast of ethnically diverse characters.

This new offering is tailor-made for children who are ready for books they can read independently with confidence.