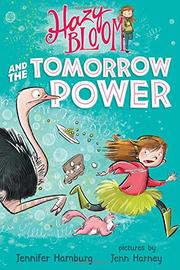 HAZY BLOOM AND THE TOMORROW POWER

From the Hazy Bloom series, volume 1

When a little girl living in Denver has visions about the future, she discovers her new power has big pluses and minuses in this first of a projected series.

Impetuous white third-grader Hazy Bloom aspires to be the first astronaut on Mars and experiments to see how many miniature marshmallows will fit up her nose. One day, Hazy’s arms “get prickly and goose bumpy,” she feels “kind of hot and cold,” and has a weird vision of “little, round, green peas, flying around in midair.” Next day in the school cafeteria, a food fight with flying peas breaks out, and Hazy realizes this is what she saw in her vision the day before. Her second vision (of “a big, blue, sparkly number”) allows her to save an allergic friend in a sports jersey from a bee sting the following day. As Hazy’s cryptic visions continue, her inability to correctly interpret her “tomorrow power” leads to a series of disastrous messes, leaving Hazy to sort out her new ability and resolve the trouble she’s created. Hazy’s irrepressible, hilarious narration (punctuated with exclamation points and spelling vocabulary words she likes and dislikes) proves fast-paced and amusing. Final art unavailable for review.

Likely to engage the primary school set with its madcap humor and unpredictable heroine.