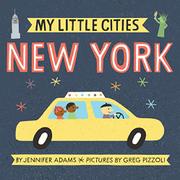 From the My Little Cities series

The youngest tourists can take a nibble out of the Big Apple in this first installment of the My Little Cities series.

Readers visit such New York City icons as the Empire State Building, the NYC subway, Times Square, Coney Island, and the Brooklyn Bridge. Adams’ simple text scans nicely, using two-word lines per double-page spread to set the scene and introduce youngsters to opposites. “Listen quiet / listen loud / sit alone / or in a crowd” is paired with Broadway, Times Square, Central Park, and Yankee Stadium respectively. Pizzoli, in his muted-colored cartoons, charmingly strips each landmark to toddler-friendly essentials; the New York Public Library lions are delightful, and the Times Square crowds are refreshingly manageable. The tableaux are populated with a representative cross-section of humanity in smiling profile—never has New York City looked so friendly. The final two pages review all the sights and share two to three sentences of simple facts about each one. Using much the same format, companion London focuses on that storied city and introduces young armchair travelers to Big Ben, the London Eye, Abbey Road (with a re-enactment of the famous Beatles cover), and a double-decker bus cruising through Piccadilly Circus.