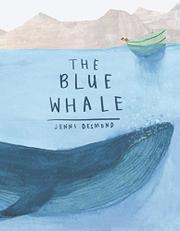 With playful observations and comparisons, Desmond presents a fount of information about “the largest living creature on our planet.”

Its “heart is as big as a small car,” its average weight of 160 tons is “about the same as a heap of 55 hippopotami,” and because the krill it eats “are bright orange, so too is a whale’s poo.” Desmond doesn’t depict the poo but she does show the krill, along with a pile of hippos, the 50 ethnically diverse people who could fit into a blue whale’s mouth, 50 jugs of milk that represent a whale calf’s daily consumption, and other vivid infographics. These illustrations are all done in a loose cartoon style with frequent views of huge, gracefully bowed cetaceans filtered through the imagination of a capering Caucasian lad capped with a red crown and clutching this very volume. The slightly elliptical narrative leaves actual young readers who might be hazy on what “frequency of their sound” means or just why capturing whales for scientific study is “unethical” to wonder. That opening reference to “largest living creature” may cause confusion too, as blue whales are the biggest animals but not the planet’s biggest living organisms (an honor that belongs to a colossal fungus).

Still, whale lovers will breach with happiness over this rich, artful mix of fact and frolic.