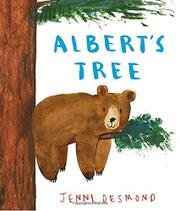 A wailing, sad tree poses a problem for a loving bear just waking from hibernation.

When Albert, a cuddly brown bear, wakes up as the snow starts to melt, he knows exactly where to go. His tree, which is perfect to him (“Not too hard, or too soft, or too slippery, or too prickly”), is waiting. But the tree doesn’t seem as happy to be reunited; it begins to cry uncontrollably, leading Albert and forest friends such as Rabbit and Caribou to offer possible remedies, from digging holes to play in to gathering grass to eat. When Albert tries a big bear hug, he finds that Tree is harboring a resident, Owl, who is crying aloud for fear of the big, furry monster lurking nearby. (It’s Albert, of course.) The picture book is as cozy and familiar as a teddy bear’s embrace, but smart touches elevate the story. They include vignettes against white space that contrast beautifully with more detailed and colorful spreads that give a wider view of the world around Albert. And by naming Albert alone of the characters, Desmond keeps readers’ sympathies squarely on the well-meaning mammal. If that weren’t enough, the endpapers include a lovely cutaway view of underground hibernation and a hilarious offhand joke that add beauty and charm, respectively, to an already endearing effort.

There are lots of children’s books about cute bears who talk like people, but few are as cleverly put together and as witty as Albert’s little adventure.