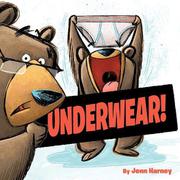 After a bath, a happy-as-a-clam, carefree “Bare Bear” is halted in their soggy tracks by a very serious parental figure in the bathroom doorway: “Stop right there! / You should be wearing / underwear!!!” Whether the child truly mishears the parent’s words, is unfamiliar with the garment altogether, or is fooling around won’t matter to readers in the slightest: They will be too busy laughing hysterically at the cub’s antics. Once a spare pair of tighty whities has been procured (the first had a big tear), the parent allows some privacy, and the cub ponders, “Where to wear this underwear?” The cub’s unbridled enthusiasm and vibrant imagination will keep kids in stitches (“Underwear makes awesome hair”), though the parent bear is not as amused (“What the heck’s goin’ on in there?!”). Still, once yet another pair is pulled from the drawer, the two share a book together, and then it’s off to bed, but the adult’s ill-chosen goodnight wish provokes one last parting shot from the tot. Harney’s digital illustrations keep the focus on the bears by using monochrome colors for all but the salient details. Facial features and body language are spot-on, and the rollicking rhymes are the icing on the cake.

This will be a riotous hit wherever it’s shared, though be prepared to see underwear worn in lots of different ways.