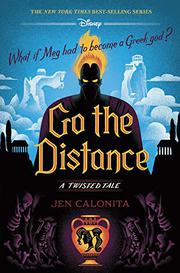 From the Twisted Tale series

Megara becomes the heroine of this fractured tale that poses an alternate ending to Disney’s Hercules.

After Hercules becomes a god, he chooses to return to Earth with Meg. She couldn’t be happier until Zeus denies his request and says she can’t remain on Mount Olympus with Hercules because she’s mortal. Fortunately, Hera offers her the chance to become a god if she can prove her worth by completing a quest in 10 days. First, she must locate Athena’s lost flute, then she must retrieve the lost soul of her ex-love’s wife from the Underworld—the same ex-love for whom Meg sold her soul to Hades and the same man who moved on to another woman one week after Meg disappeared. With the help of Phil and Pegasus, she’ll face dangerous beasts and gods and try to escape Hades once again to complete her quest. Meg must confront her past in order to discover what she truly wants in life and in love. Chapters move between past and present, adding depth to Meg’s character and her backstory of independence, lost love, and working for Hades. This is a fun story full of action, twists, and film references, but ultimately it reads a bit like fan fiction. Following the original movie portrayal, Meg has red hair, pale skin, and violet eyes.