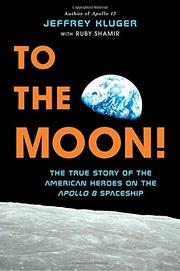 by Jeffrey Kluger with Ruby Shamir

In this account of the Apollo 8 flight, astronaut Frank Borman and his crewmates take the first manned trip around the moon at the height of the 1960s space race.

With the assistance of Shamir, Kluger introduces readers to the central figure, Frank Borman, as a boy with dreams of flying who becomes a groundbreaking astronaut. Though there were earlier flights, the book begins with the Gemini 7 and includes all missions through Apollo 8. The pacing until the Apollo flights is slow, but the fascinating details about eating, sleeping, and taking care of business while in space will keep readers turning pages. The co-authors thoughtfully and naturally explain unfamiliar concepts such as how rockets launch and what makes them fly. The writing is best when exploring the people behind the history—the astronauts’ families, friendships, and sorrow at the loss of the Apollo 1 crew—but these compelling details are too few. Similarly, the narrative paints an incomplete picture of the 1960s, with only brief mentions of the civil rights movement, anti-war protests, and the Cold War. Though the tone overall is matter-of-fact, there are a few beautiful, poetic lines. The epilogue is a romantic ode to the space race with reminders of its remarkable legacy. In an author’s note, Kluger briefly describes his process and sources, but there is no formal bibliography.

This detailed account of a lesser-known space flight varies in narrative quality but does just enough to draw in readers who grew up well after the space race.