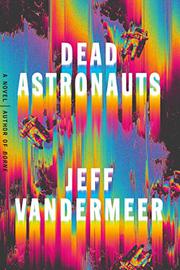 VanderMeer (The Strange Bird, 2018, etc.) continues his saga of biotech gone awry and the fearsome world that ensues.

David Bowie had just one dead astronaut, poor Maj. Tom, in his quiver. VanderMeer puts three in the middle of a strange city somewhere on what appears to be a future Earth, a place where foxes read minds and ducks threaten their interlocutors: “I’ll kill you and feast on your entrails,” one duck says, and, on being challenged about his lab-engendered ducky identity, spits back, “You are not a whatever you are.” All very true. In the ruin of the world that the nefarious Company has left behind after its biotech experiments went south, such things are commonplace, and nothing is quite as it seems, although everything dies. Sometimes, indeed, everything dies even as it lives, which explains why those three astronauts, a nicely balanced blend of ethnicities and genders, are able to walk and talk even as their less fortunate iterations lie inert. Says one, Chen, of his semblable, “Keep him alive. He might have value,” an easy task given that one version of Chen has been blown “into salamanders,” as our duck can attest. Other creatures that flow out of the Company’s still-clanking biotech factory have similar fates: They are fodder for the leviathan that awaits in the holding pond outside, for the behemoth that stalks the land. “Bewildered by their own killing,” muses Grayson, one of the three. “Bewildered by so many things. To be dead without ever having lived." Much of the action in VanderMeer’s story is circumstantial, but it provides useful backstory to his previous books Borne and The Strange Bird, delivering, for example, the origin story of the blue fox and emphasizing the madness of a humankind that destroys the natural world only to replace it with things very like what has been destroyed. Or at least that’s their intention, creating instead a hell paved with the results of mad, bad science.

VanderMeer is a master of literary science fiction, and this may be his best book yet.