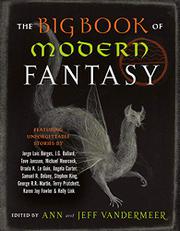 THE BIG BOOK OF MODERN FANTASY

A companion volume to The Big Book of Classic Fantasy (2019), Ann and Jeff VanderMeer’s latest anthology—and last together, according to the introduction—explores modern fantasy and its evolution from the end of WWII to 2010 with a shelf-bending collection featuring 91 stories from some of the genre’s biggest luminaries, including Ursula K. Le Guin, George R.R. Martin, Terry Pratchett, Stephen King, and J.G. Ballard.

The VanderMeers do an adept job of giving readers a comprehensive view of the narrative scope of fantasy—which they describe as “one of the broadest genres imaginable”—over the last six-plus decades with an impressively wide variety of stories. In addition to featuring iconic adventure fantasy works (Fritz Leiber’s Fafhrd and the Gray Mouser story “Lean Times in Lankhmar”; “The Tales of Dragons and Dreamers,” a Tales of Nevèrÿon story by Samuel R. Delany; and Michael Moorcock’s introduction to Elric of Melniboné in “The Dreaming City”) and classic “literary” short stories like Vladimir Nabokov’s “Signs and Symbols” and “A Very Old Man With Enormous Wings” by Gabriel García Márquez, the anthology also contains a conspicuous number of dragon-powered stories. Finnish author Tove Jansson’s illustrated all-ages story “The Last Dragon in the World” includes her signature Moomins characters in a delightful tale about a tiny dragon, and Patricia McKillip’s “The Fellowship of the Dragon” follows five armed women as they embark on a perilous quest to find a missing harpist who has been allegedly imprisoned by a dragon. Many of the book’s strongest selections come from international fantasy, with translated stories from Mexican writer Alberto Chimal (“Mogo”), French author Manuela Draeger (“The Arrest of the Great Mimille”), and Belarusian writer Abraham Sutzkever (“The Gopherwood Box”).

This doorstopper of an anthology will surely entertain fantasy fans.