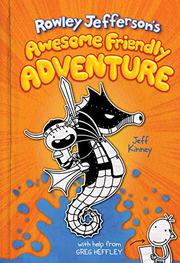 The Wimpy Kid’s best pal writes an adventure story in this follow-up to Diary of an Awesome Friendly Kid (2019).

Rowley Jefferson returns for his second solo outing, this time with the ambition of writing a book. The well-meaning, kindhearted Rowley doesn’t want fame or fortune from his story (he admits he isn’t even particularly interested in getting it published) but instead hopes to make a book good enough for his parents to read to him at bedtime. When Rowley turns to his buddy Greg for editorial assistance with his work in progress, however, Greg sees nothing but merchandising opportunities, big-budget–movie adaptations, and fast-food tie-ins. The book alternates between chapters of Rowley’s adventure story, which features young Roland and his muscleman sidekick, Garg the Barbarian, on a quest to save Roland’s mom from the wicked White Warlock, and editorial sessions with Greg. Kinney’s imagination sparks Rowley’s tale with silly creatures and adventure while the author’s wit peppers the editorial sessions with some solid jokes regarding the children’s-publishing scene (a Sherlock Holmes cameo may keep the story out of book fairs due to his pipe; a vampire-romance plot will age the book into the lucrative teen market). Rowley’s previous adventure breathed new life into the Wimpy Kid franchise, but here Rowley comes into his own as a driving force. This entry improves upon its predecessor in every way: The gags are funnier, the storytelling is sharper, and the characters are crisper. Rowley, Greg, and all Rowley’s characters are paper white.

Rowley comes into his own in this superb installment. (Graphic/fiction hybrid. 8-12)