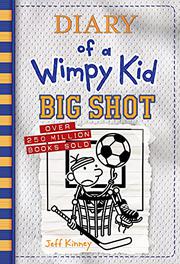 From the Diary of a Wimpy Kid series

The wimpy kid tries to throw away his shot.

After a dreadful performance at his school’s field day games, Greg Heffley is content to sit out any and all organized sports. Greg’s mom refuses to let him give up, pushing him to try out for the school basketball team. Unsurprisingly, Greg doesn’t make the cut, but a series of peculiar events leads him to join a ragtag crew of ne’er-do-wells who form a brand-new team. Needless to say, things do not go well. As the losses mount and exasperation builds, Kinney keeps the laughs coming at the usual run-and-gun pace. Fans of the long-running series will find what they expect here: wry humor, petulant tweens, and the single-panel comics that round out the Wimpy Kid universe. At this point, the series that single-handedly created an entire middle grade genre built around smarmy cartoon protagonists could easily rest on its laurels, but Kinney’s fondness for these characters shines through in this accomplished installment, proving that he is no lion in winter. The gags are good, the characters endear, and the story crackles. There are too many Wimpy Kid books to rank here, but when those Buzzfeed articles eventually get written, Big Shot will be near the top.

Another winning shot for the well-oiled Wimpy Kid machine.